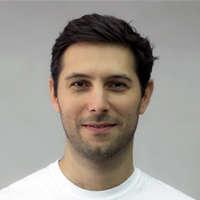 An important part of his work are projects with public focus: participation in initiatives such as “Architecture failure”, “Architectural Critique” rubric, movies like “City Feeling” and “Do You Know the Architect?”, “Urban Development Laboratory” team. He has  been a co-author of exhibitions, workshops, lectures and publications. Ljubo Georgiev is part of “Vision Sofia” to structure and coordinate the teams’s work, to create an environment for a dialogue between many different groups and to work on suggestions for a Vision-based methodology.